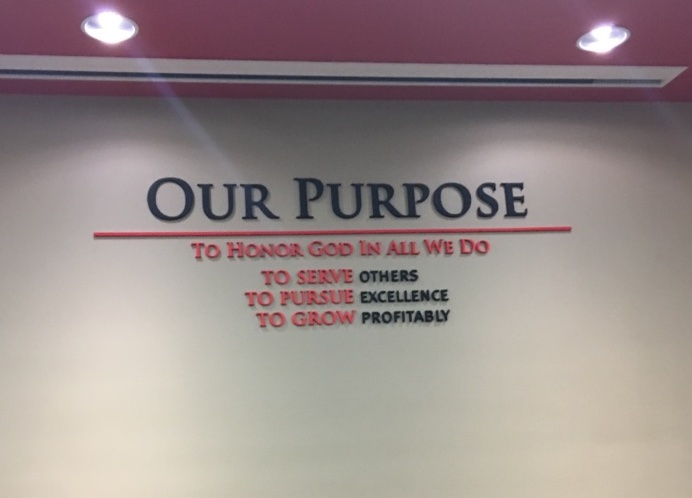 ESSENCE: Faithfully “doing right” with integrity needs a WHY, and the WHY of faithfully “doing right” needs to have integrity in the form of “authenticity” (with authenticity having four components: identity, sincerity, consistency and transparency).  In other words, the organization’s WHY must be more than a pretty sign on the wall–it’s WHY must be at the heart of its culture.

Faithfully “Doing Right” in an Organization Requires an Authentic WHY

Authenticity can be thought of as having four components:

The importance and significance of Authenticity in an organization’s WHY can’t be overstated.  Again, the Righteousness Priority of Integrity needs a WHY, and a WHY can only support faithfully “doing right” if it has Integrity.

SPOILER ALERT:  In the second step of the Integriosity journey–RE-IMAGINE–we will talk about re-imagining three elements of Purpose: Vision, People and Profit.

PERSONAL NOTE (from PM):  In 2018, I had the privilege of attending a T-factor event (T-factor stand for “Transforming Workplace Cultures”) organized by Coca-Cola Bottling Co. Consolidated, the largest independent Coke bottler in the United States.  T-factor invites business leaders from around the world to hear how Coca-Cola Consolidated integrates faith and business in order to encourage them to do the same.  Coca-Cola Consolidated is led by CEO Frank Harrison, and he brought in Mark Whitacre (whistleblower and informant in the famous ADM price-fixing case) to lead T-factor.  (I had the honor of meeting Frank in 2011 and Mark in 2014 when each spoke to the founding Chapter of the New Canaan Society (NCS), and in early 2018 I reconnected with Frank when he spoke to the National Leadership Team of the New Canaan Society at Coca-Cola Consolidated’s headquarters in Charlotte, NC). The Purpose statement of Coca-Cola Consolidated, a public company, is “At Coca-Cola Consolidated, we believe our purpose is to serve others, to pursue excellence, and to grow profitably. Above all, we strive to honor God in everything we do.”   At his meeting with NCS leaders in 2018 and at the T-factor event, Harrison emphasized “Our purpose is our culture and our culture is our purpose.”  That beautifully encapsulates Authenticity in an organization’s WHY.  For Coca-Cola Consolidated, the purpose statement was displayed in huge letters on the conference room wall (the featured image for this blog) as well as numerous other places throughout the building, but the presentations at T-factor demonstrated that the purpose statement is far from just signs on the walls.